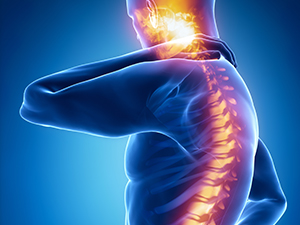 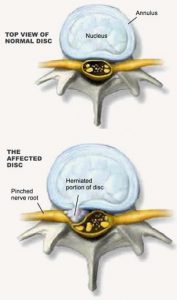 A herniated disk refers to a problem with one of the rubbery cushions (disks) between the individual bones (vertebrae) that stack up to make your spine.

A spinal disk is a little like a jelly donut, with a softer center encased within a tougher exterior. Sometimes called a slipped disk or a ruptured disk, a herniated disk occurs when some of the softer “jelly” pushes out through a tear in the tougher exterior.

A herniated disk can irritate nearby nerves and result in pain, numbness or weakness in an arm or leg. On the other hand, many people experience no symptoms from a herniated disk. Most people who have a herniated disk don’t need surgery to correct the problem.

-Intermittent or continuous back pain
-Spasm of the back muscles.
-Sciatica
-Muscle weakness in the legs.
-Numbness in the leg or foot.

-Pain in the leg or foot
-Decreased reflexes at the knee or ankle.
-Changes in bladder or bowel function.

Pain caused by a lumbar herniated disc can seem to occur suddenly, but it is usually the result of a gradual process of breakdown.

A less common cause of lumbar herniated discs is a traumatic injury, such as a fall or car accident. An injury can put so much pressure on a disc in the lower back that it herniates.

Intervertebral discs are composed of an annulus fibrosus and a nucleus pulposus.

Annulus is an outer fibrous layered ring which surrounds the inner gel-like center, the nucleus pulposus.

Cause of Spinal Disc Herniation

Asymmetrical loading of the disc as a result of abnormal alignment causes nuclei pulposi to shift creating a concentrated focal pressure to eventually break down the annulus fibers.Decrease motion of the disc and joints preventing hydration and nutrient metabolic waste exchange causing dehydration and tissue degradation.

There are four stages of Disc Herniations

Stages 1 and 2 are referred to as incomplete, where 3 and 4 are complete herniations

Throughout our lives, we have physical stress on our body, some being acute such as falls, traumas, accidents and others which can be chronic such as sitting for long periods, working at a desk for long periods, using computers or phones or even just standing for long periods. These physical stresses may cause us to lose our normal alignment and the spine is placed in a weakened position. At first, this causes no pain but, as the spinal structures are continuously abnormally loaded, they begin to break down leading to spinal damage and eventually the development of pain and functional loss. Asymmetrical loading of the disc as a result of abnormal alignment causes nuclei pulposi to shift, creating a concentrated pressure to eventually break down the annulus fibres. Decreased motion of the disc and joints prevents hydration and nutrient metabolic waste exchange causing dehydration and the development of discopathy (protrusion/ herniation).